Yatsu looks like the assassins of the Assassin's Creed. A slight look of Amon. He wields shurikens. In his casual clothes he wore a black hoodie and sometimes black polo. Long sleeves that is folded nearly to the elbow. He also wears black slacks and low rised boots. In rare times, he wore a cross-shaped necklace which is LIsa's birthday gft to him, he always wanted to have one. Trinity said that he had a habit of wearing his small hat in his missions. He is always seen carrying his large shuriken. Yatsu can be rarely seen wielding his Heveanly Spear or wearing his samurai outfit.

He is simply violent, and a  kamidere. When he met Lisa, he liked her because of her coldness. When they are in 5th grade, then he finally realized that she is merciless and numb, he got so scared, shocked and freaked out. He finally got worn out to her. His another crush:

Areeyah Bohemia, because of her good nature, stoiceness, and strong will. He doesn't have any idea why Lisa and Areeyah are soo close to each other. When it comes to Lisa, he is acting like a real servant. HE always wanted to catch up to Lisa. He is very fond of filipinos, which is his liking to Lisa. Like all of the other boys, he also had a strong dislike to Angelo. In their first meeting, he always tease Lisa for being short. He was later on punched a 1000 ft. away.Like all the other characters, he feels like he is in hell when he looks at LIsa's eyes. He liked playing his piano, and his flute. He is quite perverted.

He made his appearance by observing Sanity LIsa. When he watched this he was amused, and surprised of her destructive power. He called her " the God's killing machine", S♦L's Polluted Arm includes him to combat.    He doesn't know why he is in battle. He tries to discourage Ron, because of his deep injuries. He haven't planned any strategies yet. He kept attacking S♦L, still there is no scratch. Because of the infection that cause Lisa turned into Sanity♦Lisa, the injection contains several rare crystals (which includes the hardest rocks). Yatsu's daggers are made in Sandstones, while S♦L's weapons and clothing are made in the hardest stones, which are the  obsidian, quartz, and marble. He only try to talk with her, but no use. When he attacks, she just blocked them or break them. It is hard to block when she is in close combat, because she uses her Obsidian Lance. 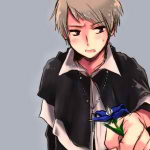